On the other hand, the shooting game was an indispensable attraction at the shrine fair. This one was even simpler. The rifle’s muzzle is filled with cork bullets, which are aimed at a target. The target is a box of candy or a stuffed animal. What I find strange about target practice is that the sweets and stuffed animals are not necessarily what you want. It is just fun to hit the target. However, the sense of accomplishment I felt when I received the prizes was a little bit magical, which I could not experience anywhere else. The target-shooting corner in Shibamata Hi Karara Yokocho was created by a company that sells target-shooting equipment. Naturally, they don’t sell them commercially,” he said. I think it is common these days to make these kinds of things from new materials and stain them to make them look like they are made from new materials, but the guy I asked to make it for me found old materials and made it for me. That’s why they look so realistic, right? Mr. Han laughs wryly. Another interesting feature is the subtitle of the “Shooting Corner” sign. It says “Guess and get a prize” in small letters on the side. With all due respect, I have to put a question mark (in the sense that there is nothing I really want).

The original Bon Curry, limited to Okinawa: “I hear Okinawans are not satisfied unless it tastes like this,” said Mr. Han.

Also well-constructed and exciting is the “Shibamata Toy Museum” located on the second floor. It opened the year after we opened the store on the first floor in 2004. Someone approached me and said, ‘Why don’t you put something like this here? In the center of the space is a slot car track, and further in is a recreated tea room. Through a window with frosted glass in places, one can see a black-and-white television, a tea chest, and a chabudai (tea table), all arranged in a haphazard fashion. Next to them, aliens, robots, and Ultraman appear. I told the contractor that I wanted a diorama, and this is what I got. He was a very particular person. He made the robots and aliens himself. 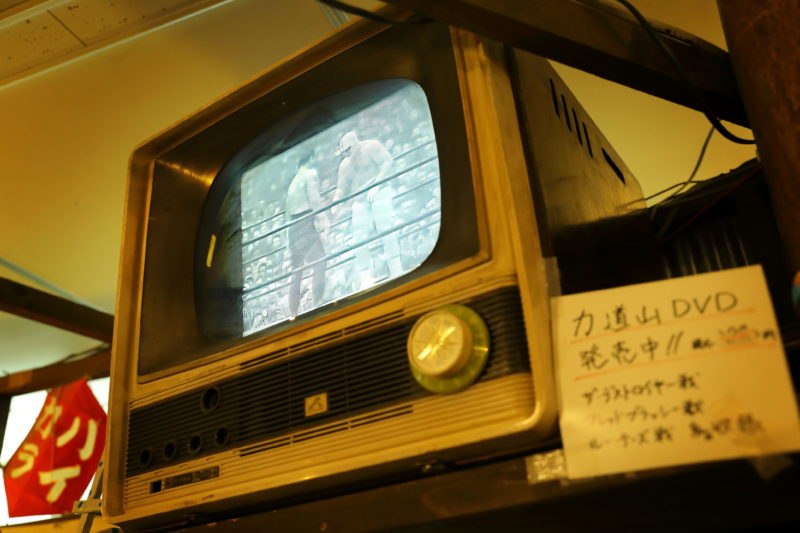 The black-and-white screen TV shows Rikidozan’s fights and other events. Inside is an LCD TV, which is only old on the outside, but interesting enough to be an item.

Other items include stationery and magazines such as Shonen Magazine, which must have been published in the 1950s. Many of the items displayed in the museum are borrowed from people they met when they opened the store or from their neighbors. Apparently, human connections are an important point of interest. From the time we were building the store, neighbors would come up to us and ask us to come by, or they would lend us their old signboards. We also borrowed Astro Boy from a neighbor. Most of the things that I’ve had since I was a child and have been tucked away in the back of the closet are usually thrown away by my parents at some point, right? There were quite a lot of things left behind that were not thrown away. I borrowed them and put them on display.

Oh, you want to take a picture? If so, you should wear a hat. With this remark, the museum staff puts a hat on his head, which is sure to be coveted by many enthusiasts. The hat was once used by Tokyu Corporation.